You Are Here: ALADIN 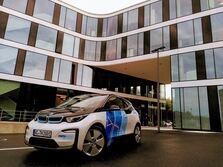 Real vehicle tests are an elementary part of the development and validation process of automotive software. However, the increasing complexity of the control functions and the driving scenarios covered by these functions lead to constantly increasing test effort. Especially in the context of automated driving, where complex scenarios with many traffic participants occur that have to be detected by a multitude of sensors with measurement inaccuracies and processed in real time, the integration into the real vehicle turns out to be increasingly challenging. In classic vehicle tests, this reduces the reproducibility of the driving tests, while the effort required to set up the real scenarios increases. The Vehicle-in-the-Loop (ViL) concept offers a novel solution. By coupling a real vehicle including its control unit with a virtualized environment, ViL represents an additional level between purely simulative tests and validation in real traffic. This enables the integration of control functions into the vehicle at an early stage of development, without complex driving situations and without cross-influences caused by faulty sensors. In addition to the significantly lower effort compared to test drives in real road traffic, this also leads to an increase in safety, since other road users only appear virtually, and also ensures a higher reproducibility of the tests. Especially for control functions based on artificial intelligence, which have a high integration effort and are difficult to secure due to the black-box behavior, ViL can be a promising technology.

The aim of the ALADIN research project is to establish the Vehicle-in-the-Loop approach through the exemplary validation of a data-driven driving function previously developed in simulation. For this purpose, a real vehicle is equipped with a real-time simulation system, that simulates the surrounding traffic and infrastructure. The test drives in the virtual city environment will take place at the secured test site of the Aldenhoven Testing Center.