You Are Here: Franz Pischinger to Receive Aachen Engineering Award 2015

City Hall. RWTH Rector Ernst Schmachtenberg and the Mayor of Aachen, Marcel Philipp, emphasize that the awardee serves as a role model for young people. 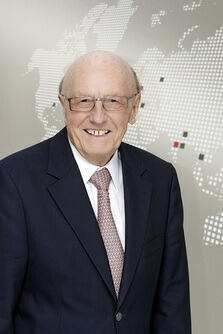 On September 11, Pischinger will be presented with the award in a celebration event in the Coronation Hall of Aachen City Hall. The former director of the Institute of Applied Thermodynamics and founder of FEV GmbH will be honored as an influential, high-profile personality in engineering.

In 2014, the award was presented to Professor Berthold Leibinger of TRUMPF GmbH & Co. KG, a pioneer in the field of laser technology.

An Expert in Thermodynamics and Engine Technology

"Technology pervades our world, and this award is to honor the life’s work of distinguished engineers,” explained Rector Schmachtenberg, who considers the awardee’s function as a role model to be particularly important. Mayor Philipp emphasized the significance of science and research for the city and the region: “The universities are the most important institutions in our city. The Aachen Engineering Award illustrates our good collaboration – we want the brightest minds to come to us. The life’s work of Professor Pischinger is admirable in every way.

The awardee himself, a 84-year old scientist, engineer and entrepreneur in the fields of propulsion, vehicle, and energy technology, is deeply moved by the nomination. As the Austrian-born researcher explaind: “It is a very special award, as it comes from my new home.” Appreciating the internationality of the Aachen and its special position in the heart of Europe, the researcher has grown attached to the city: “A part of my family is here, RWTH and the opportunities it offers are here, FEV’s headquarters are located here – of course this is what I call home!”

After completing his engineering degree, Pischinger became research assistant at the Chair of Combustion Engines and Thermodynamics at Graz University of Technology, Austria. He completed his doctorate in 1954. After gaining the post-doctoral lecturing qualification (habilitation), he became head of research at AVL List GmbH in Graz. Between 1962 and 1970, he worked at Klöckner Humboldt Deutz AG, where he became head of engine development.

Pischinger’s time in Aachen began in 1970, when he accepted appointment as professor of applied thermodynamics and director of the Institute of Thermodynamics at RWTH Aachen. Until 1997, he taught at RWTH and passed on his knowledge and experience in combustion engines and applied thermodynamics to about 9,000 students. As part of research activities led by Pischinger, more than 200 engineering graduates completed their doctorate in mechanical engineering.

In 1978, Pischinger founded FEV – initially, a flat on Augustinergasse served as office space for the four-person firm. Rapidly, the company developed into one of the leading development partners of the automotive industry worldwide. In 2003, Franz Pischinger left the operational management of FEV in the hands of his son, Stefan Pischinger, who also succeeded his father as director of the Institute for Combustion Engines at RWTH Aachen University.

Today, FEV, which is headquartered in Aachen and has about 3,800 members of staff in 35 locations, has a hand in all relevant innovations in engine technology. Whether it’s the High Efficiency Combustion System (HECS), the Diesel particulate filter (DPF), turbocharged gasoline direct injection engines, two-stage supercharging, or downsizing, FEV has been – and is – involved.